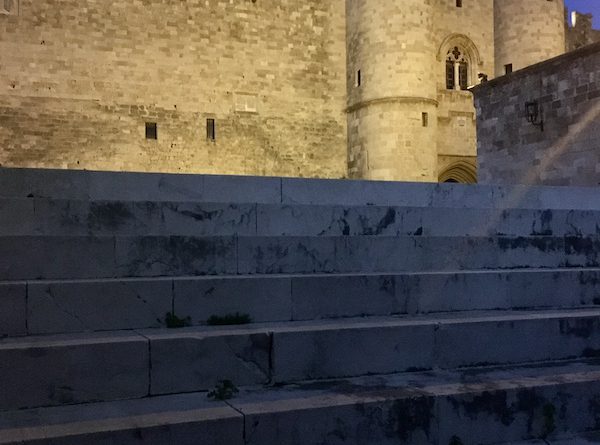 Museums in Rhodes: most of the archaeological finds of the most significant importance for the Dodecanese islands are collected in the Archaeological Museum of  Rhodes, originally built to be used as the city’s major hospital during the period of the domination of the  Knights of St. John (15th century). The second hospital used by  the Knights is now home to the library of the Archaeological Institute. Visitors entering the old town from the entrance to the port they realize that the museum building occupies the entire visual range. From the main entrance you have access to the central internal courtyard where there is a statue of a lion holding the head of a bull with its paws. Inside the building there is a vast collection of epitaphs from the Classical, Hellenistic, Roman and Knights of St. John period as well as a huge number of interesting statues including two Kouros and two Aphrodites (the smallest of which is known as Aphrodites of Rhodes) and a large collection of urns and vases.

Piazza del Museo, Medieval Town near the street of the Knights

The Museum of Decorative Art of Rhodes is located in Argyrokastrou square, a few meters from the Municipal Art Gallery. Despite being a rather small building, it houses a beautiful collection of ceramics, fabrics and carpets, carved wooden pieces and embroidery as well as traditional costumes, tools, tools and furnishings.

The church of the Virgin of the Castle (Panagia tou Kastrou), one of the most impressive buildings in the old town of Rhodes, located at the beginning of the street of the Knights, houses the Byzantine Museum of Rhodes . Built at the end of the 11th century AD, its architectural structure has a cross plan surmounted by a dome, with the western arm of the cross longer than the others. Until 1309, when the island was ceded to the order of the Knights of St. John of Jerusalem , it was the Byzantine cathedral of Rhodes . It was later converted into the Roman Catholic cathedral, an event also mentioned in a papal bull of 1322.

The Municipal Gallery of Rhodes was inaugurated in 1962 by Andreas Ioannou, a student of the Modern Greek School of Painting who was Prefect of the Dodecanese in those years. The Gallery today houses one of the most representative and authoritative collections of Greek paintings of the twentieth century. Most of the Greek painters who have worked creatively over the past nine decades developing the characteristics of modern Greek art are represented in this collection through some of their most distinctive works.

– Oceanographic research in the Aegean and Mediterranean seas.

-development of “know-how” in the field of aquariology.

-cooperation with other research institutes.

-Transfer of knowledge about the seas to specific public groups through the organization of specialized conferences and seminars.

Via Kos, on the northern tip of the island in the new town.

Museums in Rhodes: exhibition Center of the Grand Master’s Palace

The Grand Master ‘s Palace is an approximately square building (80 × 75 m.) Designed around a large internal courtyard (50 × 40 m.). Built at the end of the 7th century to function as a citadel of the Byzantine fortress, it continued to play its role during the Byzantine period and the period of the Knights of St. John (1309-1522). The building was modified before the Knights settled on the island; in the first 25 years of the 14th century the Knights began to restore the Byzantine citadel and converted it into the Grand Master’s residence and administrative center of their state.

It can also be reached along the street of the Knights .

A masterpiece of military architecture, these imposing walls run for 4 km, interspersed with 151 coats of arms of Grand Masters and Knights . The tour of the walls starts from the palace of the Grand Master. Timetables are displayed on site.

Both of these exhibitions are included in the guided tour at The Grand Master’s Palace . The exhibition on Medieval Rhodes is entitled “Rhodes from the 4th century AD to the Turkish conquest (1522)” and offers a glimpse of daily life and business in the medieval Byzantine era, with contemporary icons, Italian and Spanish ceramics, armor and military items. The section dedicated to antiquity, entitled “Ancient Rhodes: 2400 years” overlooks the internal courtyard. It traces 45 years of archaeological research on the island, with a wonderful collection of artifacts.

Attached to the Amboise gate, the restored clock tower boasts spectacular views. It was erected in 1852, in place of a Byzantine one and marks the boundary of the Collachium.

The Hafiz Ahmet Aga Library (1793) houses a chronicle of the siege of Rhodes in 1522. It is a collection of very rare Arab and Persian manuscripts, which includes cleverly illuminated copies of the Koran from the 15th and 16th centuries, returned in the early 1990s. to the library after being stolen and rediscovered in London.

In the aquarium, visitors (about 200,000 per year) can admire specimens of anthozoa, molluscs (gastropods and cephalopods), various species belonging to the crab family, echinoderms and the following families of fish: Dasyatidae, Mullidae, Sparidea, Centrachantidae, Labridae , Scaridae, Siganidae, Mugilidae, Scopaenidae, Triglidae, Balistidae, Monacanthidae, as well as sea turtles. The museum also displays various kinds of sharks and other fish, sea turtles, toothed whales (Odontoceti), and Mediterranean monk seals. Thanks to the research grants of the Hydrobiological Station of Rhodes and of the National Marine Research Center, the station carries out research programs concerning every aspect of the Oceanography of the Dodecanese area. It also holds the function of model research unit in the Mediterranean.

In 1934, during the Italian occupation of the Dodecanese islands (1912-1943), the regulator Mario Lago started the construction of the “Royal Institute of Biological Research of Rhodes” on the “Capo Mili”, the northernmost point of the Rhodes island . The Italian architect Armando Bernabiti took care of the design and construction projects, the last finishing took place in 1935. In his work, Deco’s art and local architectural elements have been combined with others of naval aesthetics, such as the curved lines, openings such as portholes, various levels of elevation and a central cylindrical turret. Marine life inspired the main decoration of the entrance.

The original interior of the aquarium, decorated with porous rocks and natural shells, is reminiscent of an underwater cave and has not changed over time. The floor has also remained unchanged, covered with a black and white mosaic of pebbles, on which sea creatures are represented. The building’s original exterior did not change until 1971-72, when an exhibition hall (museum) and seal pool were added on the north side. The institute began functioning in 1937 focusing mainly on the biological and hydrological objects related to the Aegean sea and also on the problems concerning the sponge fishing, the fishing industries and the agricultural entomology, at the same time hosting an aquarium with interesting samples. of the Mediterranean fauna.

From 1948, when the Dodecanese islands were united with Greece, until 1963, the institute continued to function as the Regional Station of the Hellenic Hydrobiological Institute under the control of the Athens Academy of Sciences. Since 1963, with its present name, “the hydrobiological station of Rhodes” (Hsr) has been functioning as an Aquarium-Museum and research unit of the Hellenic Center for Marine Research (HCMR-Ministry of Development / General Secretariat for Research and Technology). The Greek Ministry of Culture characterized the HSR building as a historical reference and a distinct example of the international architectural style. The purpose of the hydrobiological marine station of Rhodes is to “develop and spread scientific knowledge on the marine environment and its conservation”.

The most interesting species of flora and fauna endemic to the Mediterranean and Aegean seas are mainly exhibited in the aquarium, together with some species from the Red Sea. In the part of the aquarium that is dedicated to marine life there are 12 tanks, from 1,000 to 5,000 liters of capacity, a central circular tank of 25,000 liters and 15 small aquariums of 50-100 liters of capacity each. In the museum, a 1,000-liter aquarium houses freshwater and endangered Ghizani fish (Ladigesocypris ghigii), endemic to the island of Rhodes . Managing all the species hosted by the aquarium (accumulation, transport, nutrition, care and exposure) and controlling and taking care of all the equipment requires the daily and elaborate work of a team that also contains biologists and technicians.

Special care is dedicated to the preparation and distribution of food to the specimens housed in the aquarium. Their diet includes squid, mussels, shrimp, octopus, fish and fresh vegetables. An open seawater circulation system is installed in the aquarium, i.e. the water is continuously renewed, with minimal treatment, guaranteeing the almost natural lifespan of the specimens housed. The sea water, pumped to 44 m., Is filtered through the pro-filters and sand-filters (sand filters) and is subsequently distributed to the tanks. A volume of approximately 75,000 liters of seawater circulates in the aquarium installations, including healing tanks.

The pH ranges from 7.9 to 8.6, the salinity is about 39%, the dissolved oxygen is 6.7-8.8 mg / l and the turbidity is almost zero. Telematics is used to control the technical installations of the aquarium and the quality of the sea water. A closed system is used for the 3,500 liters of fresh water circulating in the laboratory and exhibition tanks. Fresh water undergoes an ultraviolet treatment and is recycled through mechanical and biological filters, while its physical-chemical parameters are checked daily. The museum’s interesting collection contains rare exhibits accompanied by information material and video projections.

– Oceanographic research in the Aegean and Mediterranean seas.

-development of “know-how” in the field of aquariology.

-cooperation with other research institutes.

-Transfer of knowledge about the seas to specific public groups through the organization of specialized conferences and seminars.

Via Kos, on the northern tip of the island in the new town.