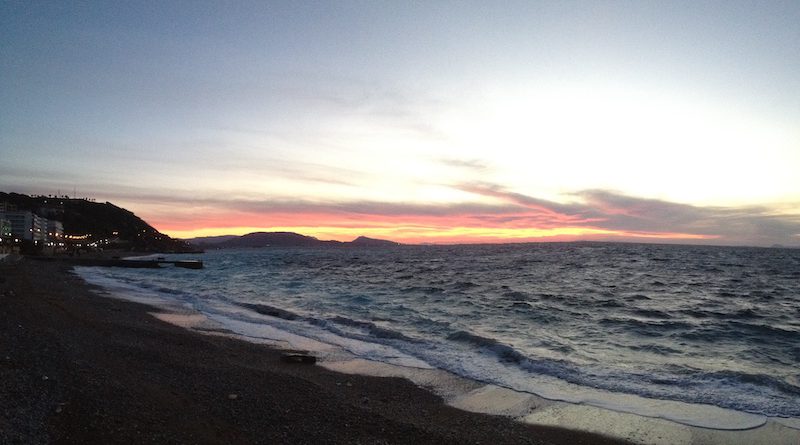 Excursions in Rhodes: for those who want to wander around the island of Rhodes by car, motorbike, scooter, tricycle, bicycle, tandem or other means of your choice, here are some of the possible destinations for organizing pleasant excursions on site. We suggest some destinations that do not have the purpose to culturally enrich but that are also useful for obviating the usual tan and make you rest your skin a little. The beaches therefore they will not be considered as destinations of this viritual tour, also because it is discussed extensively in other pages of this site. Below you will find only some ideas to leave the city, maybe the places listed below are the most beautiful or the most popular, there is always the possibility of getting lost pleasantly in this island and discover new magnificent places that no one has ever heard about it. Bring a map to always keep at hand that sooner or later you have to go back to the base…

the monastery of Filerimos and the remains of the ancient Yalissos, the first to the south of the three cities that jointly built the city of Rhodes in Greece on the northern tip of the island . From the top of the acropolis you can enjoy a breathtaking view of the island.

The spa built by the Italians at the time of their occupation. Unfortunately the thermal spring has been lost and therefore they have not been functional for years. Recently they have been restored, it is definitely worth a visit and a swim in the cove. The thermal baths of Kalithea , collection of photographs.

the famous valley of the butterflies, an earthly paradise surrounded by greenery with streams and colorful flowers. Natural scenography for the real star of the place, the Callimorpha Quadripunctaria, a pretty butterfly that made this place famous.

on the west coast it is possible to visit the remains of the ancient city of Kamiros with its acropolis. Kamiros is the second city to the south that participated in the founding of the city of Rhodes in Greece .

the valley whose name means seven springs, another very green oasis with fresh waterways and a nice restaurant where you can take a break for food and refreshments.

still on the west coast, after a steep climb you will find the remains of the castle of Kritinia, a sensational sighting point from where you can enjoy a splendid panorama.

locality famous for the production of wine and souma, a grape distillate similar to italian grappa. It is a great place to take a break and enjoy local specialties, especially grilled meats to pair with their wine .

the monastery perched on the tip and the contrast between the almost electric blue of the sea and the emerald green of the surrounding vegetation make this place mythical.

the third and best known city of antiquity which together with Yalissos and Kamiros founded the city of Rhodes in Greece . Now it is a picturesque village of white houses at the foot of the imposing fortress with the castle and the remains of the ancient acropolis.

the extreme southern tip of the island with the beach frequented mainly by windsurfers due to the practically constant strong wind. Depending on the tide, the beach acts as a natural bridge between the islet of Prasonisi and the island of Rhodes in Greece .