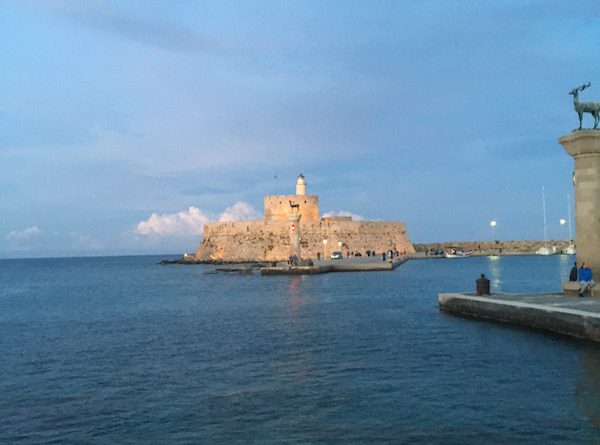 The Colossus of Rhodes: “To you, O Sun, the people of Doric Rhodes raise this bronze statue which reaches Olympus after calming the waves of war and crowning their city with the spoils of the enemy. Not only over the seas but also on land they light the sweet torch of freedom. “
Votive inscription on the Colossus.

Only 56 years passed from its construction to its destruction, which was enough time for it to earn a place among the Seven Wonders of the Ancient World. “Even if it lay on the ground, it is still wonderful”, said Pliny the Elder about it. The Colossus of Rhodes was not just a gigantic statue. It was rather a symbol of unity of the people who inhabited this beautiful Mediterranean island .

The Colossus of Rhodes, the history

During most of its history, ancient Greece was made up of city states that limited its power as well as its borders. On the small island of Rhodes there were three of them: Ialysos, Kamiros and Lindos . The island of Rhodes was an important economic center in the ancient world, it is in fact located on the southwestern tip of Asia Minor where the Aegean Sea comes into contact with the Mediterranean. In 408 BC, these three cities joined together to create a territory with a single capital, Rhodes. The city which was designed to take advantage of the island’s best natural harbor on the northern coast. It prospered commercially and had strong economic ties with their main ally, Ptolemy I Sultan of Egypt. In 357 BC the island was conquered by the Mausoleum of Halicarnassus (whose tomb is one of the other seven wonders of the ancient world), fell into Persian control in 340 BC and was finally conquered by Alexander the Great in 332 BC.

When Alexander died very young, some say of fever, his generals began fighting bitterly with each other for control of the vast Macedonian kingdom. Three of them, Ptolemy, Seleucus and Antigonus, managed to divide the kingdom. The rhodians supported Ptolemy (who had ceased to rule Egypt) in this struggle. This angered Antigonus of Macedon, rival of Ptolemy, who in 305 BC sent his son Demetrius to conquer and punish the city of Rhodes . The war was long and painful. Demetrius brought with him an army of 40,000 men, more than the entire population of Rhodes , but they never managed to penetrate the city.

When Demetrius attacked the city, the defenders stopped the war machines by digging a pit outside the walls and blocking the heavy monsters in the mud. When almost a year had passed since the beginning of the war, a fleet of ships from Egypt arrived to help the city. In 304 BC a peace agreement was reached. Demetrius quickly withdrew leaving on the island the great siege tower and many war machines. To celebrate their victory and freedom, the Rhodians sold the war equipment and used the earnings to erect a giant statue of their patron God, the God Sun, Ilium or Helios. According to Pliny, a historian who lived several centuries after the Colossus was built, its construction took 12 years and was completed in 282 BC

The Colossus of Rhodes

The rhodian sculptor Chares of Lindos was entrusted with the construction project of the Colossus. He was a patriot and had fought in defense of the city. Chares had made large statues before. His teacher, Lysippus, had built a statue of 20 meters tall representing Zeus. Chares probably began by building smaller versions of the statue, 1 meter high, and used these as a guide to model each of the bronze skin plates of the Colossus.

To build the statue, his workers cast the bronze of the many war machines that Demetrius had left behind to build the bronze plates of the skin and the outside of the figure. The base, 15 meters high, was built in white marble and the feet and ankles of the statue were fixed first. The structure was erected gradually as the bronze form was fortified with a stone and iron structure and the large assault tower of Demetrius was transformed into the armor for the project. To reach the highest parts, a ramp was also built to from the ground went around the whole statue and which was subsequently removed. When the colossus was finished, it rose about 33 meters. from the ground.

Collapse of The Colossus

The Colossus stood proudly at the entrance to the port of Rhodes for something like 56 years. Every morning the sun must have captured its shiny bronze surface and made the figure of the God Helios shine. The statue is generally depicted with its legs open at the harbor entrance so that ships could pass under it. Then an earthquake hit Rhodes around 226 BC. The city was severely damaged and the Colossus broke in his weakest point, his knee. When it fell, “few people could embrace its thumb while using both arms”, wrote Pliny.

The huge parts of the figure layed along the harbor for at least a millennium. It is said that Ptolemy III of Egypt immediately offered to cover all the costs of its reconstruction, but the Rhodians, after consulting an Oracle, refused the offer. They feared that the statue had somehow offended the God Sun, Ilios, who provoked the earthquake to destroy it. In 654 AD the Arabs conquered Rhodes , disassembled the remains of the Colossus and sold them to a Jew from Syria. It is said that 900 camels were needed to transport the fragments to Syria. A sad end for something that must have been a majestic masterpiece.

The truth about the colossus

As picturesque as this story is, today we are able to dispel with certainty some misconceptions about the appearance of the Colossus and its location. First of all, it was long believed that the Colossus stood in front of the port of Mandraki, one of the many ports of the city of Rhodes , legs apart on his entrance. However, given the height of the statue and the width of the harbor entrance, this is rather impossible than unlikely. Furthermore, the fallen Colossus would have obstructed the harbor entrance. Recent studies suggest that it was erected either on the eastern promontory of the port of Mandraki, or even further inland. Either way, he never rode the harbor entrance.

As for its appearance, although we are not aware of the Colossus’ real shape and appearance, modern reconstructions of the statue standing with legs together are more accurate than the old drawings. It is thought to have been made in a more traditional Greek style naked, wearing only a crown of thorns, protecteding the eyes from the sun with the right hand, and held a cloak in the left. Despite vanishing into thin air, this incredible Wonder of the Ancient World inspired modern artists such as the French sculptor Auguste Bartholdi, best known as the creator of the Statue of Liberty.