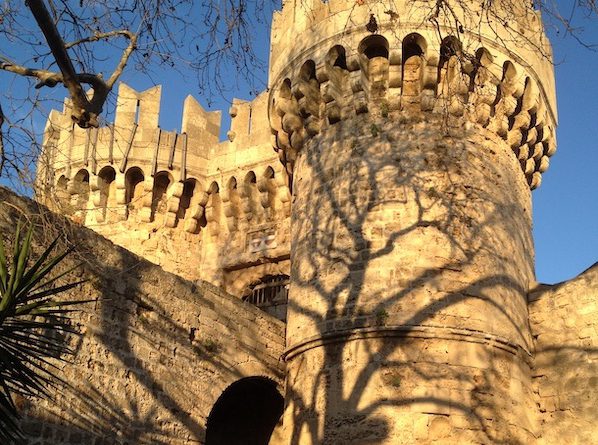 The Knights Of Rhodes – Knights Hospitallers: Their correct title was “Knights of the Order of the Hospital of St. John of Jerusalem”. Later they became known simply as “Knights of St. John” or “Knights Hospitallers” or “Knights of Rhodes .”And, finally “Knights of Malta ”. The Order of St. John was founded by a certain monk Gerarde Tenque or Tunk (Gerardo Sasso), also known as “the Blessed”. Gerard ran a small hospital in Jerusalem when it was besieged by the Crusaders in 1099. During the siege, he aided the hungry Crusaders by throwing loaves of bread at them from the walls. When he was questioned by the Muslims, defenders of the city, he said to escuse himself that he was throwing stones. However, Gerard was brought before the Jerusalem Commander. His bag, full of loaves, was presented as proof of his betrayal, but when his contents were emptied onto the floor, the loaves had turned to stone! Brother Gerarde was released and became famous throughout the Christian camp as “Blessed Gerarde”.

Soon knights and princes honored Gerarde and his newly founded Order with precious gifts, including some lands in Europe. The tasks and duties of the Order were now not limited to the management of the hospital but included the task of keeping the roads clear of possible threats to pilgrims. Many of the sons of noble families who, despite having a strong religious vocation, were instead trained only in the art of swordsmanship, joined the ranks of the Order. Devoted to chastity, poverty and obedience, these monk-soldiers gradually became a corps of professional soldiers and the most formidable armed force of the time. Their bravery became legendary in the battlefields and among enemies. They could be anywhere at anytime, and you could always find them where the battle was most intense and the in greatest danger. However, the splendor of the Order did not always remain uncontaminated. As its power grew, it began to follow only its own rules. The purpose of the Order became at times exclusively its own advantage and the vows of chastity, poverty and obedience were broken. And if, occasionally, there was disagreement with the Pope’s will, the order simply ignored it.

The Eight of Europe?

The story of the Knights of St. John in Palestine ends on Friday May 18, 1291. On this day, 250,000 Mamluks under the command of Al-Ashraf attacked the walls of Acre, the last stronghold of the Crusaders. Grand Master Jean de Villier was seriously wounded in battle. The remaining Crusaders embarked on their ships and left the Holy Land forever. The Knights of St John founded a temporary refuge in Cyprus, controlled by the reluctant Hernicus II. The Knights did not want to return to Europe. They wanted to fight the infidels and stay as close as possible to the Holy Land. So they started looking for a suitable place as a permanent base. In the meantime they passed their time hunting pirates, one day the Knights came to Rhodes in Greece. It was love at first sight! The Knights felt that Rhodes was prefect… and they were neither the first nor the last to have this feeling. From that day on , Rhodes never left the minds of our good Knights. Thus they began to study the plans for the definitive settlement of the Order on the island , perfectly located halfway between east and west and famous for its beauty.

In 1304 Foulques de Villaret was elected Grand Master. It was with Villaret that Vignolo Vignoli, businessman and strardoniary pirate (or was it the other way around?) Agreed to divide Rhodes: 1/3 for him and 2/3 for the Knights. With the blessing of Pope Clement V and the approval of the kings of England and France, the Knights of St. John landed on the east coast of the island . Very soon they occupied the Byzantine fortresses of Pheraklos and Phileremos, cutting off the city from the rest of the island. The Order claimed the contol of Rhodes, in return the Order agreed to pay an annual tribute and to support the Emperor with armed men whenever he needed it. The Emperor Andronicus rejected the offer with contempt. So on August 15, 1309 (the day of the feast of the Holy Virgin Mary), the Knights of St. John took the city of Rhodes. The legend tells that, wearing sheepskin, the Grand Master and a small group of brave Knights hid in the middle of a flock and taking advantage of a dark and cloudy day, they managed to enter the city. After killing the guards, they opened the doors to their comrades that were waiting for them outside. Here begins the story of the Knights of Rhodes .

The Knights Of Rhodes – The hierarchy of the order

Knights : they must have been the descendants of at least four generations of nobles by both parents. They wore a black cloak with a white eight-pointed cross on the left. They were equipped with a sword and wore spurs. The administrative and military officers of the Order were elected or designated by this class. Devoted to chastity, poverty and obedience, they were obliged to fight in defense of the Faith.

Chaplains : they were responsible for the religious duties of the brothers and for looking after the institutions of the Order. Later they were divided into two classes: those who performed their duties within their headquarters (conventual chaplains) and those who performed similar duties but in European convents and possessions (obedience priests).

Sergeants : there were two types: Sergeants at Arms (servientes armorum) and Sergeants at Offici (servientes officii). The latter were the feudal lords of the Knights and could themselves become Knights. The former, on the other hand, did not possess the noble requisites to become Knights, but were employed in the hospital and their position subsequently became very coveted.

All those who had taken the vows were designated “of Justice”. Those short of requirements could be admitted to the Order of the “Knights of Grace”.

The three constituent classes of the Order were divided by nationality called “Langues” (franc languages), originally seven: Auvergne, England, France, Alemagna, Italy, Provence and Aragon. Later the language of Castile was also added, for a total of eight. Each language included Priories or Grand Priories, Baliaggi and Commendas. The Sector General elected the Grand Master, who obtained the Lifetime Priory General.

Street Of The Knights